In the Footsteps of the Prophet: A Spirituality of Service (Khidmah)

The meaning of true service

Sunday’s workshop by SimplyIslam on the topic of Spirituality of Service kickstarted with Ustadh Usama Canon sharing a hypothetical story about two Muslim men – Yahya and John – leading two very equal lives: Both are family men. Both have regular office jobs in a (good) company. And both work diligently at their jobs in order to be of service to their family .

The difference between Yahya and John, however, can be seen every Monday morning when both of them ready themselves for work.

Yahya, upon strapping into his carseat, would sigh and groan, “Yet another Monday.” John, on the other hand, would make the intention that his going to work is to support his parents and family, to be of benefit to creation, and to see Allah swt’s blessings manifested throughout his day. Because of their difference in intention, Yahya’s activities will unfold to him as mundane, while John’s would be seen to him otherwise.

According to Ustadh Usama, the different intentions of these two men not only form their separate realities, but it is also the distinct factor of what makes the meaning of true service: the intention of doing the service only for the sake of Allah swt.

Why do we need to serve?

There are three over-arching reasons on why there is a need for us Muslims to be in service to others.

The first is derived from the below well-known verse from Surah Imraan:

“You are the best nation ever brought forth to mankind, bidding to honour, and forbidding dishonour, and believing in God…” (Qur’an 3:110)

There are two points to note from the verse. Firstly, according to the mufassireen (scholars who interpret the Qur’an), the act of calling others to good and prohibiting others from evil, as well as of believing in Allah (swt), are all prerequisites of being the best of nations that have been brought forth to men. Secondly, the understanding of the mufassireen is that the phrase “ukhrijat li-nass” does not just mean “brought forth to mankind”, but also, “brought forth as a service to mankind”.

In essence, we need to be in service in order to live up to our standing amongst creation and fulfil our fitrah as “the best nation”. When all of us collectively become people of service, only then will we be an essential component to the society at large once again. When our predecessors entered into a foreign land, they did not look at themselves as a superior people and “force” Islam unto the existing community. Instead, they humbled themselves in service until hearts are won and Muslims became an irreplaceable part of the society. 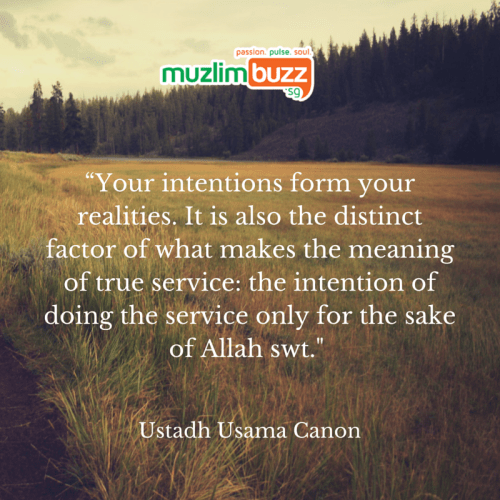 The second reason why we need to be in service is to give thanks and gratitude for the blessings that Allah (swt) have given us. According to Ustadh Usama, Allah (swt) gives us all specific blessings only because other people are in need for them from us, be it our knowledge, money, time, energy or even influence. These blessings remain with us only when we share it with others (and thus be of service to them). When we choose to keep these blessings only to ourselves, however, these blessings will be taken away and given to others who are able to use it for the benefit of others.

Lastly, being in service helps to break our nafs, keep us humble, and remind ourselves that despite all that we think we might have amassed in this dunya, we are in the end, just a servant.

Shaykh Afeefudeen al Jaylani, in a recent talk he gave, shared a story about Imam Sharawi, a celebrated Imam in Cairo, Egypt. One day, Imam Sharawi was invited to the opening of a glistening new mosque, and as his car headed towards it, a huge crowd of people gathered to receive him, including notables such as ministers. After the event, as Imam Sharawi’s car passed by a small mosque by the roadside, he stopped his driver, and told him to wait in the car.

Two hours passed, and the driver still saw no sign of Imam Sharawi. He was puzzled; what could the Imam be doing for so long in that mosque? His curiosity piqued, the driver went into the masjid in search of Imam Sharawi, only to find the celebrated Imam cleaning the masjid’s toilet (which was a far cry from the clean toilets of Singapore). Surprised, the driver questioned the act of Imam Sharawi. The Imam then responded, “The people elevate me, but I am doing this only for Allah swt”.

Who / what do we need to serve?

Often when we think of being in service, our mind conjures up images of volunteering at non-profit organizations or helping out at our local masjid. While these are valid and recommended forms of service, Ustadh Usama stressed that the very first group of people who have the most right to our service are those sitting right at home — our parents and our family members.

The Prophet Muhammad (saw) was often engaged in service to his family, doing menial tasks that others might not want to. Despite being the leader of the community and the most beloved in and out of his home, hadith literature narrates that he (saw) would often help with the household chores and mend his own belongings. He (saw) too said, “The best of you are those who are best to their families, and I am the best of you to my family”. 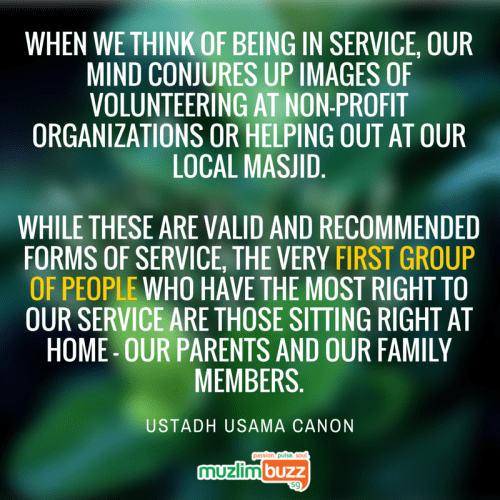 While the idea of being of constant service to ones’ family — specifically, parents — might be more challenging to some than it is to others, Ustadh Usama emphasises that one has to do it all the same. After all, the arabic word for “family” — usrah — shares the same root word for the arabic word for “prisoner”; in that one has no choice in the matter. And being a prisoner, the act of struggling in service is not a choice, but a norm that everyone needs to accept and embrace. However, the great challenge too comes with its great reward: For those who make their parents happy, the reward of an accepted Hajj awaits them, inshaAllah.

Once a person has begun to be of service to his family and his parents, his act of service to others can then be expanded into bigger circles — the Ummah, all mankind, animals, as well as other inanimate objects.

With countless issues facing our own communities at home as well as our brothers and sisters around the world today, the prospect of having to serve everyone and everything as outlined above might be too overwhelming and daunting for some of us. What do we need to care about? How on earth do we start helping in solving all of these issues?

The sphere of concern for a Muslim should — by right — be everything that affects the world in a negative way. However, Ustadh Usama noted that there are amongst us people whose hearts are small and whose concerns are thus limited to only their own wellbeing, and perhaps that of their immediate family members.

Hence, a person should begin by first inspecting his own sphere of concern, and then make the effort to open his heart to more concerns of the society — to start thinking globally.

Therefore, the intersection between the one’s sphere of concern and one’s sphere of influence should be the point of action for a person, bearing in mind that he should always make an effort to increase the size of each sphere consistently.

Benefit of serving others

While the responsibility and need to be of service to others might sound heavy, the reward of being in service in actuality far surpasses the struggles that one might go through. In a hadith, the Prophet Muhammad (saw) was reported to have said:

”Whoever goes forth to fulfil his brother’s need and makes headway in fulfilling that need, it is better than observing a retreat (iktikaf) in the mosque for ten years.”

Commenting on the above hadith, Ustadh Usama added for emphasis that when a person goes into iktikaf for one day sincerely for the sake of Allah, Allah swt will put three trenches between him and the hellfire, with each of the trenches being in width akin to the distance between the East and the West.

But more importantly than the rewards of Paradise and protection from hellfire, is that in service we find the redha of Allah swt, inshaAllah.

Ustadh Usama Cannon concluded the workshop by advising that as Muslims, we should engage in everything on the spirit of service for the sake of Allah swt; whether we are the ones serving or being served.

Just like the example of Yahya and John shared in the beginning of the article, we are the ones who decide whether or not our actions are done in benefit or in waste. When we are in service to our families and our communities day in and day out, we have the opportunity to either just gain credit points, a reputation for being good or just exhaustion, or we could work to gain the redha of Allah swt in our actions by making our intentions clear and our actions sincere.

May Allah swt make us one of the sincere, and may He use us to the benefit of our family, our community, the ummah, the entire mankind, and all of creation, inshaAllah.

Nur Fadhilah Wahid
Fadhilah is a seeker of knowledge at the International Islamic University of Malaysia. She blogs at www.fadhilahwahid.com