For Muslims worldwide, Eid is a very special celebration. It marks the end of the month of Ramadan, when for a whole month, Muslims abstain from eating, drinking, and engaging in intimate conjugal activities during daylight. Eid can also be seen as somewhat of an Islamic Thanksgiving – it is celebrated by visiting relatives and strengthening relationships or silaturrahim, while also moderately feasting on food and drinks.

4 Reasons Why Eid-Ul-Fitr is Celebrated:

There are many things that we should be grateful for in life. During the Eid celebration, Muslims are grateful to Allah the Glorious for giving them strength to power through the month of Ramadan. We know that nothing can be done without His permission; therefore, being able to fast during Ramadan is a blessing in itself. Besides that, Muslims are also grateful on Eid for the revelation of the Quran, which occurred during Ramadan as well. This is revealed in the Quran:

“Ramaḍan is the month in which the Qur’an was revealed as a guide for humanity with clear proofs of guidance and the standard ˹to distinguish between right and wrong˺…” [Qur’an, 2:185]

The Qur’an is Islam’s Holy Scripture, and it serves as guidance to mankind. Its revelation, also known as Nuzul Qur’an, will help Muslims understand Islam and its practices, as well as everything that encompasses it. 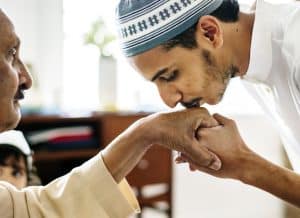 Muslims who are grateful for the numerous blessings given to them know to seek forgiveness from Allah the Merciful. They know their own shortcomings and the actions that should be taken. However, Muslims are also encouraged to forgive one another and clear up any animosity that they may share. In this sense, forgiveness will help repair and mend the silaturrahim between the Muslim brother and sisters.

The act of fasting during the month of Ramadan helps the Muslims to better understand the pain that the underprivileged and the poor may suffer. This revelation of hardship that some people may go through should be instilled in them gratitude, as well as the feeling of helping one another. They perform charity by giving money to the poor, also known as Zakat. It is an obligation for Muslims to pay a certain amount on behalf of their family members to ease the hardship of the underprivileged.

Similar to any other celebration around the world, Eid is celebrated to spread joy among those who celebrate it. Some cultures have different traditions in celebrating it. For example, some Muslims in Malaysia celebrate it by lighting up fireworks with their relatives. People will greet each other merrily and visit one another house in celebration of Eid. It is a celebration to reconnect with those who you haven’t connected with in a while. Visitations would also be accompanied by traditional delicacies, which is a plus when it comes to celebrating Eid.

There are certain practices that Muslims would do on that day, from the sunnah by the Prophet, Peace and Blessings be upon him, to the traditional routine of hanging up new curtains and spring cleaning the whole house.

One of the sunnahs on Eid ul-Fitr is eating an odd number of dates before going to the mosque to perform Eid prayer. Unlike the practices on Eid ul-Adha, it is symbolic of eating before performing the prayers to indicate that you’re not fasting. It was recorded that the Prophet, Peace and Blessings be upon him, would eat several dates before going to the musolla to perform the Eid prayer, which in turn had birthed the tradition of eating and offering something sweet during Eid.

“Allah’s Messenger (ﷺ) never proceeded (for the prayer) on the Day of `Id-ul-Fitr unless he had eaten some dates. Anas also narrated: The Prophet (ﷺ) used to eat odd number of dates.” [Sahih Al-Bukhari]

Another sunnah of Eid ul-Fitr uses a different road to come and go to the mosque. This is closely tied to the notion of Eid itself; to meet more people, give thanks and supplicate and wish them well in conjunction with the celebration.

On an Eid day, Allah’s Messenger (ﷺ) would return by a different road from the one he had taken when going out (for the ‘Eid prayer.) [Reported by al-Bukhari].

It is important to remember that even though Ramadan has passed, it does not mean that your ibadah should take a hit. Instead, we should be istiqamah in our ibadah and continue to please Allah Almighty. With that being said, one important sunnah of Prophet Muhammad ﷺ is to fast for 6 days in the month of Syawal. There are also abundant rewards and virtues accompanied with this sunnah. Two significant virtue of fasting for 6 Days in Syawal are:

It is also noteworthy that several other events took place during the month of celebration in Syawal:

The Battle of Uhud took place on 11 Syawal 3 H, and is the second war to took place after the Battle of Badr. It is recorded to be the only war that the Muslims lost due to internal betrayal committed by Abdullah Bin Ubay. As many as 71 people died during the Battle of Uhud, including the Prophet’s uncle, Hamzah Bin Abdul Muttalib.

The Birthdate of Imam Al-Bukhari

In conclusion, there are many blessings in the beautiful month of Syawal. It is a time to love and cherish our brothers and sisters and reconnect with them. It is a month of celebration after Muslims managed to abstain from eating, drinking and intimate conjugal activities in the daylight. From celebrating Eid, to noteworthy events occurring in Syawal, it is indeed a time of joy for Muslims worldwide. It is also not to be forgotten that there are sunnahs to follow in Syawal, and this continuity of ibadah even after Ramadan will be noted by Allah Almighty, Insha’Allah. May Allah the Merciful forgive our sins and bless us all, Ameen.