The story of the sacrifice started when Prophet Ibrahim experienced a divine dream from Allah, where he is seen sacrificing his son Prophet Ismail in His name. Before he had the chance to do so, Allah miraculously replaced his son with a ram (a male sheep), directly sparing his son’s life. Allah said in the Qur’an:

“So when they had both submitted their wills (to Allah), and he had laid him prostrate on his forehead (for sacrifice), And We called out to him saying: O Ibrahim! You have indeed shown the truth of the vision; surely thus do We reward the doers of good: Most surely this is a manifest trial. And We ransomed him with a Feat sacrifice (i.e. a ram)”. [As-Saffat: 103-106]

Eid ul-Adha is celebrated on the 10th of Dhulhijjah, the last month in the Islamic calendar. Depending on the countries celebrating Eid-ul Adha, the holiday usually takes 2-4 days. It is marked by performing a two-rakaah prayer at the mosque to thank Allah the Gracious for the blessings they received.

After performing the prayer, It is followed by sacrificing a ritually accepted animal, also known as the Qurban. There are some factors that you have to consider in choosing a qurban animal, which are:

Make sure you choose an animal that is of adult age. For example, if you decide to sacrifice a sheep or goat, it must at least be 1 year old. For cows and buffalos, it’s 2 years old, and for camels, it’s 5 years old.

Make sure you choose an average physique animal that is not deformed in any shape or form.

Remember to choose an active and healthy animal, and try to avoid animals that have clear signs of illness or disease on them.

It was narrated from Shaddad bin Aws that the Messenger of Allah (ﷺ) said:

“Allah has prescribed Al-Ihsan (proficiency) in all things. So if you kill, then kill well, and if you slaughter, then slaughter well. Let one of you sharpen his blade and spare suffering to the animal he slaughters.” [Sunan Ibn Majah].

In Islam, Muslims are taught to slaughter animals humanely. It is vital for those performing the slaughter to recite the name of Allah first to show that all life is sacred. The slaughtering symbolises the sacrifice that we make for the sake of Allah– sacrificing the things that are beneficial and dear to us, such as our riches and bounties, for Him.

The meat you get from the slaughter will then be divided into three groups; your family will get one-third, your relatives will get the other one-third, and the rest will be distributed to those in need.

The Holy Pilgrimage, or Hajj 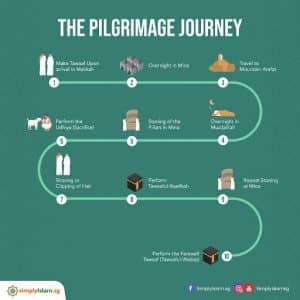 Another essential aspect of Eid-ul-Adha that is not to be forgotten is the act of performing the Holy Pilgrimage, also known as Hajj. Allah the Gracious mentioned in the Qur’an:

In it are clear signs and the standing-place of Abraham. Whoever enters it should be safe. Pilgrimage to this House is an obligation by Allah upon whoever is able among the people. And whoever disbelieves, then surely Allah is not in need of ˹any of His˺ creation”. [3:97]

The Holy Pilgrimage is one of the five pillars of Islam. In over five to six days, from the eighth up until the end of the thirteenth day of Dzul Hijjah, Muslims who have the means come together to Makkah to perform Hajj. It is compulsory for those who are physically and financially able to perform the pilgrimage at least once in their lifetime.

In conclusion, the month of Dzulhijjah is one where we remember Allah Almighty and sacrifice our bounty in His remembrance. From sacrificing animals to performing the Hajj, it is a momentous occasion that we should not let go to waste. Let us remember that in this holy month, we are given a chance to reconnect ourselves with Allah the Gracious and perform acts of deeds that will be compensated in the next journey of our life. May Allah the Merciful forgive our sins and bless us all, Ameen.