Infamous Cults All Over the World 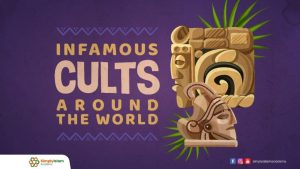 Oblivion can cause us a great deal of trouble, especially when you do not possess the right knowledge in religion. When the mind is tarnished and blind faith is imbued, people tend to veer off course and get involved with illegal and dangerous cults which could not only harm others, but even themselves by means of a mass suicide or genocide.

In this article, we are going to dissect the three most infamous cults all around the world which you may or may not have heard of. May Allah protect us all from ignorance and error in knowledge.

Essentially, Heaven’s Gate was an America UFO cult founded in 1974, in California, USA. The followers of the Heaven’s Gate cult were led primarily by Marshall Applewhite and Bonnie Nettles.

According to their superstitious beliefs, the adherents thought the Earth and everything on it were about to be “recycled” to a clean slate before 2027. In order to survive, the only chance was to leave their human bodies at an appointed time. Initially the group had been told that they would be transported with their bodies aboard a spacecraft that would come to Earth and take the crew to heaven, referred to as the “next level”, and believed hitching a ride on comet Hale-Bopp in March 1997 could allow them to survive.

However, due to the preposterous heresy, 39 members including the cult leader, Applewhite, participated in a mass suicide by poisoning themselves in shifts in a California mansion wearing Nike’s sneakers and armbands that read “Heaven’s Gate Away Team.”

Sky Kingdom or in Malay, Kerajaan Langit, was a Malaysian religious commune and sect founded by Ariffin Mohammed, who is known as Ayah Pin. The commune, based in Terengganu, Malaysia, was demolished by the government in August 2005. The Malaysian government estimated that there were 22,800 adherents altogether at the time.

One of the heretical beliefs Ayah Pin possessed was that he claimed to have direct contact with the heavens and is believed by his followers to be the reincarnation of Jesus, Buddha, Shiva, and Muhammad. Devotees of Sky Kingdom believe that one day, Ayah Pin will return as the Imam Mahdi. His followers considered him the king of the sky, and the supreme object of devotion for all religions.

Another dogma is that Ayah Pin accepts the existence of angels, as well as a class of Malaysian forest fairies, called Orang Bunian. The Sky Kingdom also emphasizes the importance of spiritual healing as well as dream interpretation.

However, in 2016, Ayah Pin was found dead at his hometown in Terengganu and his followers were detained by the government.

Aum Shinrikyo was a Japanese doomsday cult founded by Shoko Asahara in 1984. The cult attracted young, elite university students and graduates who believed that the apocalypse was near and that they would be the only ones to survive.

In 1995, the adherents carried out a sarin nerve gas attack in the Tokyo subway system, possibly in an attempt to bring about the apocalypse, and possibly to keep authorities from shutting down the group. Thirteen people died, and thousands were injured in the attack.

Thirteen members of the group received death sentences. The first seven, including leader Shoko Asahara, were hanged in early July 2018, and the remaining members were executed later that month. Ironically, the cult was never banned in Japan and still exists in offshoots. The cult currently has 1500 followers altogether.

In retrospect, we were all born a blank canvas and it is absolutely critical to choose the right and proper knowledge which will not lead us astray from the straight path. It is important for us to have a firm and strong foundation of Tawhid and abide by the rules according to Syari’ah as well as Fiqh. Hence, for those who are interested in expanding their knowledge in the realm of fiqh, rules of worship, explore more at The Fiqh of Worship.