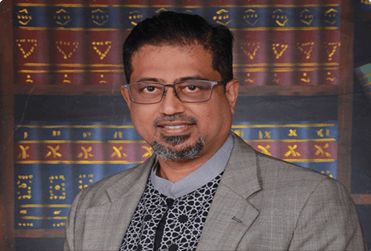 Mohamed Nassir is currently a Ph.D. candidate at International Institute of Islamic Thought and Civilization (ISTAC-IIUM). He graduated in December 2017 with a Masters Degree in the field of Religion in Global Politics from SOAS University of London (School of Oriental & African Studies). He had earned a First Class Honours Degree (B.Sc.) from Staffordshire University (UK) in 2001.

Mohamed Nassir worked for many years in the software industry before spending some 8 years working for Islamic organisations in Singapore like The Muslim Converts Association of Singapore (Darul Arqam) & Abdul Aleem Siddique Mosque. He was listed in “The 500 Most Influential Muslims 2009” and “The 500 Most Influential Muslims 2010” published by Jordan’s Royal Islamic Strategic Studies Center. He was mentioned in a Berita Harian article (“Kenali 50 Wajah”, Dec 2010) as among four individuals who are expected to play a crucial role in directing and shaping the ‘face’ of the Singapore Muslim community. In 2009, he was invited to participate in the Muslim Leaders of Tomorrow (MLT) global conference in Qatar (Jan 2009). In June 2011, he was a Discussion Leader on the subject of “Faith, Youth and Social Media” at the World Economic Forum in Jakarta. In March 2013, he was a discussion participant in the Muslim Minority Leaders Colloquium in Paris. He has been featured in several documentaries and discussion groups on Islam, extremism, education, etc.

Mohamed Nassir is a proponent of traditional Islam and denounces all forms of terrorism and extremism. He (and SimplyIslam) was featured in the documentary entitled “Misguided”, a 4-part documentary about terrorism (aired in January 2010) produced by Mediacorp Singapore [view excerpt]. He is regularly featured in the local media discussing issues of national and community interests, as well as his active role in the nation-wide initiative, Aid to Syrian Refugees in Turkey (ASRIT).

Together with some concerned individuals, Mohamed Nassir established SimplyIslam in 2006, and continues to lead its steady growth. In Singapore, SimplyIslam operates in 3 centres across the island, with over 1,000 students attending its weekend Islamic school program, and hundreds attending its regular adult classes. He also led the expansion of SimplyIslam to Malaysia and is currently leading a team to run the Itqan Schools, made up of full-time preschool, primary and secondary schools, with plans for further expansion across the country and beyond. SimplyIslam also launched its online academy www.simplyislam.academy in 2020.

Mohamed Nassir is the Chief Executive Officer (CEO) of the SimplyIslam Education Group with educational assets in Singapore and Malaysia, with presence in the UK, India and Pakistan.