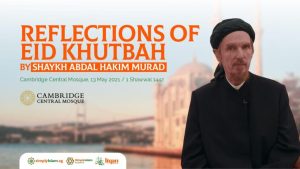 Today, we are living in an unequal and unjust age. The disparity in social and economic status between the first, second, and third world countries is substantial, especially with the impact of the pandemic causing the poor to be poorer and vice versa.

The recent Eid Khutbah delivered by Shaykh Prof Abdal Hakim Murad entails the significance of zakah or giving alms, and the poor whose status is high in the sight of Allah the Merciful. The sermon also comprises the reality of an unbalanced economic and political system throughout the world and its ramifications.

[Charity is] for the poor who have been restricted for the cause of Allah, unable to move about in the land. An ignorant [person] would think them self-sufficient because of their restraint, but you will know them by their [characteristic] sign. They do not ask people persistently [or at all]. And whatever you spend of good – indeed, Allah is Knowing of it.

“In this verse, Allah subhanahu wa ta’ala is praising the poor who are ashamed to ask, and who when we look at them, we might not think that they’re poor at all. This is of their dignity, but Allah still urges us to give.”

“One of the last things Muslims are required to do is to pay Zakat al-Fitr (obligatory almsgiving of Eid al-Fitr). We might think, “Why do we have to pay additional Zakat, as well as Zakat al-Mal (wealth) amounting to 5 pounds or so?” The origin of this is to ensure that there is nobody on the day of Eid who goes hungry.”

What Allah Sees in a person:

“Allah subhanahu wa ta’ala doesn’t care about the letters after our names, or ancestors, doesn’t care about which class we’re born into, doesn’t care about status. But he cares about real nobility, and this nobility in Arabic, karam, is linked to the idea of karim, which means generous. The generous person is the noble person. The one who transcends his selfish desires and cares for others. ”

The reality of global disparity:

“Two centuries or more after the Enlightenment launched the slogan of liberty, equality, fraternity, never has the world been so unequal. The richest 1% of adults own 40% of the world’s wealth. The three richest people in the world own more than the 50 poorest countries in the world, all put together. This is extraordinary. In the US Warren Buffet, Jeff Bezos, and Bill Gates own more than the poorest half of the American population.”

“According to Oxfam and other charities, Covid has made this even worse. The rich survive as they sit on their yachts, watching their blooming investments- but what about the man who is driving a taxi and can’t do so? Or the cleaner whose office is closed because everybody is working from home. Or the restaurant owner whose restaurant is closed. So many people are really suffering and have been suffering. As an Ummah, very often, we are towards the bottom of the economic hierarchy, and we too are suffering, and we should look to those who are needy in our families, communities, and neighborhoods.”

The Ummah that cares:

“We are reminded that we are an Ummah whose nobility comes about through generosity, through Karam, through Ikram. So, we are the Ummah that cares. The Qur’an is constantly urging us to care. Some of the very earliest verses of the Holy Qur’an to be revealed are about the need to care. The Quraish tribe too was divided, between the super-rich, and the destitute. Between Abu Lahab, Abu Jahal, Abu Sufian, Umayyah ibn Khalaf on one hand, the Oligarchs of Quraish, and those who were sleeping, starving in the dusk outside their front doors. However, the Qur’an urges us to fight against that.”

“We are to be the Ummah of solidarity with the poor. In this messed up world, which tried communism, that leveled this out and that failed, and it was a nightmare. We tried socialism, which has fizzled out, that is now in the grip of this turbo-capitalism that is crunching down upon the poor. And this is not even a political left or right position, the Sunnah position is, the poor come first. Give and give and give whatever you think the government should be doing, give and give and give because there will always be Barakah (Blessings) in your giving.”

The blissful experience at Al-Aqsa Mosque:

“Three, maybe four years ago, I had the great honor and privilege of saying the prayer of Eid al-Fitr in al-Masjid al-Aqsa, one of the great experiences of my life. The supreme place of supreme beauty. The Eid prayer there in Palestine, what a beauty it is. People come from the villages and it is difficult for them, sometimes they are obstructed, sometimes it takes them days, and they sleep at the roadblocks because they want to make the prayer in al-Masjid al-Aqsa. They know this is a Prophetic commandment, they know the rewards are multiplied in the Noble Sanctuary. They know in the sound hadith narrated by Bukhari that we are required to go there <لا تشدو الرحال الى اذتا ثلاث> “we go to the three sacrosanct mosques”.

“Beautiful voice and those beautiful people, the poor, the destitute, some of them refugees, some of the weakest people on earth, they are in that glorious place. And then the salam, but people don’t leave, everybody stays. And from the mosque, you hear Qur’an, and tasbih, and the takbirs of Eid, and beautiful things. It’s like being in heaven as the sky slowly becomes light. The rosy dawn spreads over from behind Jabal Zaitun, from behind the Maqam of Rabiah al-Adawiyah. Past the great tombs of Sayyidina Shaddad ibn Aws, Ubadah ibn al-Samit, some of those who are closest to the Holy Prophet, salallahu alaihi wasallam, who are buried right there next to the Haram. And then the sky gets lighter, it’s a miracle. I’ve never seen such a beautiful sky. And then the moment comes when the first golden shaft of the rising sun comes from behind the mountain and reaches the very top of the great golden Dome of Qubbat al-Sakhra. The golden crescent and then the Golden Dome bursts into a blaze of light. The people below still in shadows and darkness, it’s like it’s still nighttime, but the dome is glowing. This extraordinary building built by the Khalifa Abd al-Malik ibn Marwan, which has been proudly there ever since, despite all the vicissitudes and the envy of the envious of the crusaders, and it’s still there. The beauty of that scene. And then when the sun is fully up, more tasbih and then everybody lines up…”

“With such joy and singleness of purpose the poor, the weak, the destitute, the powerless, those with travel documents that are worth nothing internationally, line up in that glorious place, in that glorious scene to face al-Masjid al-Haram, unified by that Qiblah. I’ve never seen so beautiful a prayer in all of the Ummah of Islam. And the discipline and the restrain and the good adab (etiquette) of those people and their unity is wonderful and reassuring to the heart. But of course, when they go out, then the misfortunes begin, again, the daily grind. They represent in the most intense form the inequalities of today’s world. The haves against the have-nots. Those with status and power, against those with no status and no power. But they remember:”

“They go out and they continue to struggle knowing that Allah subhanahu wa ta’ala is with the weak.”

He says, “I am with the broken hearted”.

“Now you see that situation flaring up again, and the heart of every Muslim is there in the Haram with them as they pray at this time amidst all of the flying bullets and the calamities, and the misfortunes brought by that extreme inequality. But, they have hope, and they tell me that they have hope. Because they trust in Rabbal ‘Alamin (Lord of the Universe). ”

“We look for victory, < ان نصر الله قريب >, Allah’s victory, not victory on our terms, not a victory of vengefulness, not a victory of exclusion against another exclusion, but a victory which opens the horizons to everybody to coexist in respect as Abrahamic believers equally in a united land. Nothing else is good enough for that Holy Place. So, we ask Allah Subhanahu wa ta’ala to bring that healing to that place and to give us solidarity with those who are suffering in that place.”

Read the full transcript of the Eid Khutbah here:

Watch the full video of the Eid Khutbah here: